Social Media and Mental Health, Three Tips To Get The Balance Right

It’s fair to say that social media has had a huge impact on modern society. From the way we communicate to where we get news to how we spend our time chances are a social network of one kind or another is involved. But what about social media and mental health, how does it impact on this? We recently chatted with Danny O’Brien who does the social media module here at ICHAS and he gave us tips to help you when it comes to getting the balance right.

The Negatives of Social Media and Mental Health

People are using social media more than ever. The average adult in the UK checks their phone 28 times a day. In the US, 69% of American adults use Facebook while in Ireland this figure is 66%.

While these are huge numbers there is an adverse effect to all this time that people spend on social media. A recent report called #StatusOfMind, examined the positive and negative effects of social media on young people’s health. It found some of the health and wellbeing-related issues of social media included:

In fact, a new phenomenon called “Facebook Depression,” has been proposed. This is defined as depression that develops when preteens and teens spend a great deal of time on social media sites, such as Facebook, and then begin to exhibit classic symptoms of depression. With these growing concerns around the impact of social media on mental health, what can you do day to day to avoid this from happening?

Three Tips To Help You Out

We recently sat down with Danny O’Brien, he does the social media module here in the college and he highlighted some useful tips on what people can do to help counter the impact of social media on mental health

Social Media, The Pros and Cons It has on Mental Health

Joe Forde lecturer here at ICHAS also highlighted how huge an impact social media has had and the positive as well as the negative impact it has had, especially on young peoples mental health.

I think one of one of the most interesting impacts of social media has been the fundamental shift in how we communicate socially. While it seems kind of obvious, but it was underestimated. It is something that we take for granted but that it’s actually at the absolute heart of the human experience. Increasingly, neuroscience is indicating that the social brain is significant in many ways and that it operates not as a substructure of cognition, which was previously taught.

Plus everybody’s behind the curveball. It’s probably now only that the various disciplines are starting to engage with it on a research basis, are starting to understand this fundamentally. We’re also getting a whole lot of mixed messages from that. So for example, you can get lots of research, which would indicate that it’s contributing adversely to mental health. But, there’s equally a lot of research emerging even over the summer, where the emphasis is on the benefits in terms of mental health. There’s a master student in the college at the moment who has done a dissertation on this subject, about accessing into mental health supports. In that case, it was group work.

What the internet has done is, for example, one of the key barriers for access is stigma, and a lack of understanding about what is occurring to them. Whereas the internet opens up avenues to engage with others who are in a similar predicament, therefore reducing the stress around gaining services and reducing the stress around what is happening to the individual. So in the case of anxiety, or depression, or whatever the case may be, that there’s access, and it’s not about accessing services, it’s about seeing that what is occurring to the child or to the adolescent.

But of course, there are other big worries. Never before was there a possibility to facilitate cognitive dissonance, like the internet, where you can literally exist among the group who have exactly the same ideas as you have, for good and for bad. The bad side of it is sensationalized on the media. But it can be much more subtle than that and the way in which social media works contributes hugely to cognitive dissonance because it’s based on this system.

Social media can be a terrific tool for good. It helps to keep in touch with friends and family and keep up to date what all that’s happening. At the same time, it’s important to be aware of its impact on your mental health. If you take on the tips above and start using them today, chances are it will improve the experience you have with social media and with your phone. 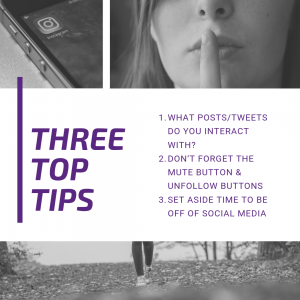